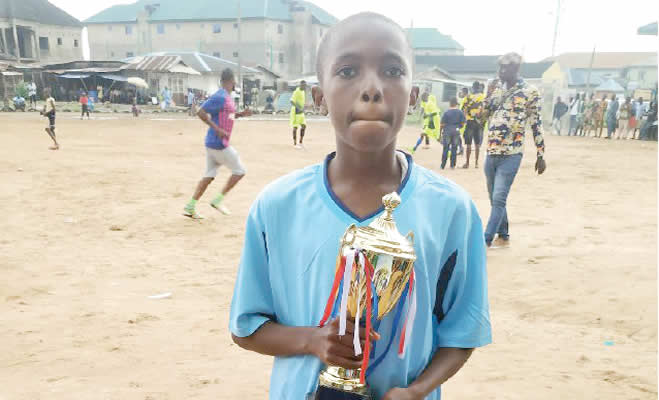 It is the dream of every young and ambitious footballer to one day play for their favourite clubs and country, and for John Stephen, his case is no different.

The 14-year-old, who harbours the desire to feature for English Premier giants, Liverpool, says he is working hard to achieve his dream of playing professional football.

“I am a big Liverpool fan and I will love to one day play for the club. At the moment I am working hard in training to ensure I fulfill the dream of playing at the Anfield Stadium.”

John, who caught the attention of fans at the Arepo Community School, Ogun State pitch while starring for Unity Estate FC with his dribbling skills, during a match last month, added that he had watched several clips of his hero, Mohammed Salah, which had helped him build his skills.

“I love Salah because of his skills, which to me are in-born.

“He is my favourite player and I will like to play just like him. I have watched many clips of him and I tried hard to study them.

“I also like to watch Lionel Messi because they are very similar, his talents are out of this word unlike Ronaldo who is also very hard working but he needs to train so hard to play each game.”

The ambitious teenage footballer further talked about how he hoped to hoped to coach the national team Super Eagles one day.

With the chances of home-grown coaches managing the Eagles increasingly on the decline,  Stephen is optimistic he’ll one day manage the national team.

He knows the pressure that comes with the job, having seen the criticisms that have trailed the Eagles under current coach Franco-German Gernot Rohr but Stephen is unperturbed and wants Rohr’s job some day.

“My role model has always been my dad because he was a former footballer turned coach.

“I want to follow in his footsteps by also becoming a coach in the nearest future and I will like to coach the Super Eagles one day. That will be a great achievement for me.”

Combining sports and education is a herculean task for most athletes, but Stephen insists he’s been able to combine both seamlessly.

“I have tried hard not to allow my football career to affect my studies in school because apart from playing football, I also want to study Mechanical Engineering so that I can have something to fall back on when I quit sports.”

Stephen’s father Sunday told PUNCH Sports Extra that it would be his joy to see his son turn professional.

He said, “We noticed John’s love for football right from when he was in nursery, he loved to go with me to training.

“And since he understands what football is all about, it has always been his dream to play for Liverpool and he even bought their towel. It will be a dream come true if he one day gets to play for them. We are doing everything we can to get him to their academy.”

On his education and football, the dad added, “There is not much pressure on him but I must confess that I want him to follow in my footsteps and become a football coach.

“We all know that Segun Odegbami also studied Mechanical Engineering and he still played football.

“I am confident that John can merge both together.”