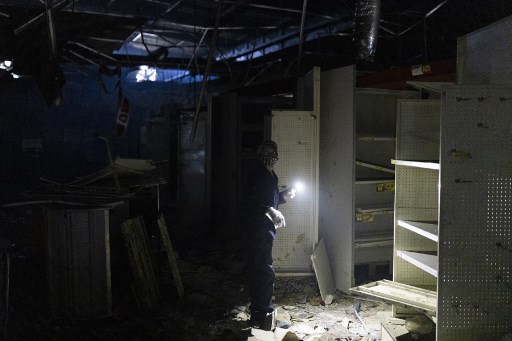 Along a street in a sprawling Johannesburg township, near a shopping mall plundered during last week’s unrest, police fling open a refrigerator door and toss out packets of vegetables and milk.

They then haul it, squeeze it between brown sofas and a bed already loaded on the back of a white van.

On top of that goes a leather armchair, followed by a blue child’s quad bike that wobbles precariously until it is securely strapped.

South African police who watched helplessly while mobs went on a looting rampage last week, are now on a campaign to recover goods stolen in full view of television cameras.

“Everybody will have to be able to show us the receipts for those flat screens, fridges and all that,” Police Minister Bheki Cele said on local television earlier in the week.

“It is going to be a very tough time in many houses… you must give us the receipt of the appliance, and if you don’t have the receipt, hard luck.”

Officers in northern Johannesburg’s Alexandra township were true to the words of their boss, squeezing through alleyways only just wide enough to walk down, seizing anything that looked new but did not have a receipt.

Soldiers deployed to help quell the unrest stand guard, cradling guns as residents watch timidly from the side of the road.

With the initial booty loaded away, the men head back into the labyrinth of narrow alleyways that criss-cross the sloping township.

They weave past corrugated iron, plywood and plastic houses crammed tightly together, brushing against lines of laundry strung across their path.

One policeman climbs onto stacked concrete blocks marking small front yards to look over the shacks and shouts out directions.

“You have anything here?” asks a soldier peeping into a shack.

They enter homes and come out with sacks of clothes and other pilfered items. Some would have been sold, while others kept for personal use

A few residents are perched on their roofs, from where they look down at the parade.

It emerges that larger looted objects are stored on rooftops because of a lack of indoor space in the small makeshift structures that are part of some South African townships.

Bustling streets
With no ladder, one officer is given a leg-up to climb onto a rusty corrugated iron sheet that cracks loudly under his feet — all to see if anything else is hidden on roofs.

Colleagues urge him to tread carefully and avoid the dangerous tangle of electric wires supplying power to the township.

A printer, a sound system and a vacuum cleaner are lowered to the ground.

The latter would probably have been sold to an informal car washer, one officer suggests, hammer in hand.

A woman peers out from her front door, warming her hands around a steaming cup of tea.

She greets the officers and watches them make their way back to the vehicles.

Soldiers remain behind to secure the area as all the remaining goods are packed into the vans.

The street around them is bustling with life. Meat sizzles on open-air grills while a group of people burn a pile of waste further up the hill.

With the confiscated goods headed to a warehouse where business owners will identify them, the vans drive away, leaving butternut, onions and spinach strewn on the dusty road.