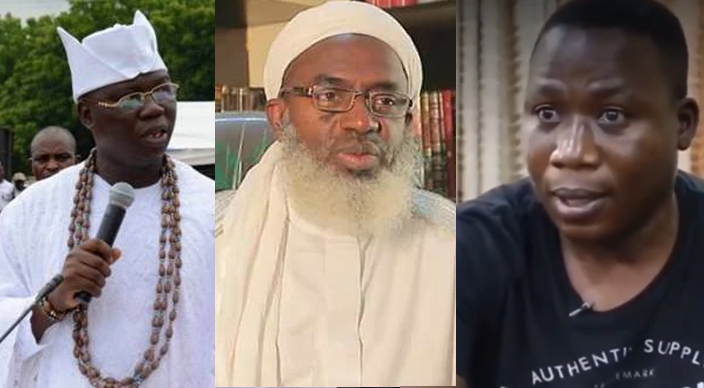 Yoruba Nation activist, Chief Sunday Adeyemo aka Sunday Igboho is an indigene of Igboho, the headquarters of the Oorelope Local Government Area of Oyo State.

In a viral video on Tuesday, the Kaduna State-based controversial Islamic cleric was seen in Igboho town alongside a former Chief Executive Officer of the National Health Insurance Scheme, Prof Usman Yusuf.

Reacting after an emergency meeting, the security group described the pro-bandit cleric’s visit as “provocative”

The security stakeholders made this known in a statement jointly signed by the convener of SSSG Gani Adams and the secretary, Alhaji Owolabi Amusat, titled, ‘Insecurity: Stay away from South-West, S/West Security Group warns bandits’.

They dismissed Sheikh Gumi’s visit to Igboho town, saying the visit was an “attempt to mock and undermine the efforts of the Yoruba activists and freedom fighters”.

They claimed that the Islamic cleric’s body language, utterances in Igboho town “truly showed that he was behind the DSS attack on Igboho’s Soka home, and that part of the Yoruba territories have been conquered”.

“Gumi is a Nigerian, he has a right to visit any part of the country but it shouldn’t be to the extent of being deliberately attacking Igboho’s ideology in his hometown.

“Such an attempt is provocative and can lead to a crisis. That was why it elicited various reactions. Gumi’s ideas are always at variance with the present reality in the country and I think it is better for him to desist from fanning the embers of discord in the country and the southwest in particular,” part of the statement added.

The security stakeholders also warned bandits and other “bad elements” to stay away from the South-West region.

They claimed that that “there are feelings that bandits have perfected their plans to strike in South-West.

The statement added, “On this note, the southwest Security Stakeholders Group has considered it necessary to beef up the security operations in our region, and we charged the police and all other security outfits, across the region to remain vigilant in ensuring that the region is safe. Any attempt to invade the southwest will bring about both economic and political doom”

“SSSG is driven by the calls to ensure effective security across the southwest. We are also keen on regionalism where each region will control the security architecture of their respective region. If Nigeria didn’t return to or go back to regionalism based on the true Federalism that we have in the past, there may be a crisis and nobody should blame those agitating for self-determination.

“But as a group, we will not relent in the struggle to protect the South West and we are determined to partner with the police and other security agencies to combat crime and make the region safe for all and sundry.”