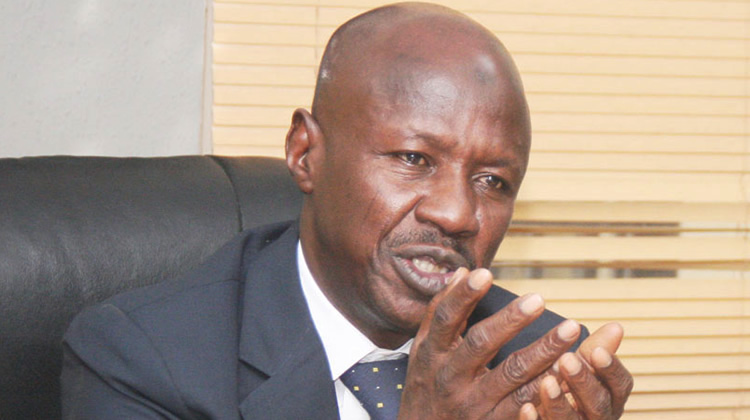 Almost sixteen months after he was suspended from office, the erstwhile acting chairman of the Economic and Financial Crimes Commission, Ibrahim Magu, is being paid half-salary by the authorities.

Based on the Public Service Rules, Magu while on interdiction. would only get half-pay pending the determination of his case.

Magu, a Commissioner of Police, was suspended on July 10, 2020 by the President, Major General Muhammadu Buhari (retd.), over allegations of insubordination and corruption levelled against him by the Attorney-General of the Federation, Abubakar Malami, SAN.

Buhari consequently set up a presidential panel headed by Justice Ayo Salami to probe the various allegations against Magu.

The PSR states that the Permanent Secretary may place a public officer facing a serious case that may lead to dismissal on suspension.

The rule reads, “Interdiction: when a serious case that may lead to dismissal has been instituted against an officer, the Permanent Secretary may interdict and place him on half-pay pending the determination of the suspension.

“When disciplinary proceeding for a criminal case has been instituted or is about to be instituted against an officer, he shall be suspended from office without salary pending the determination of the case.”

But the delay in releasing or implementing the Salami panel report has caused Magu his selection for promotion to Assistant Inspector-General of Police and sparked doubts about the Federal Government’s touted commitment to accountability in the public service and the anti-graft war.

Speaking on the case last month, the Minister of Police Affairs Muhammad Dingyadi, had said since the Salami report was submitted to the President, no further communication had been sent to the ministry and the Nigeria Police Force.

“What I know is that the matter (report) has been submitted to Mr President and as far as I know, no communication has yet been submitted to the ministry or police force on this matter. So, we are waiting for the final outcome to be made public,” he noted.

Commenting on the predicament of his client, Magu’s Tosin Ojaomo, said the case was a reflection of the injustice in the country.

He said, “When I learnt of Magu’s replacement, the question I posed to the government was where is the report of Justice Ayo Salami? I also inquired where is the white paper issued thereon? Till today, we are still waiting for the answer.

“I participated in the proceedings of the panel and I saw how most of the allegations levelled against the EFCC boss fell flat during the hearings.

“The issue is even not about the individual involved but the institution and our country; where the law provides for the mode of carrying out a task, it is mandatory things must be carried out in accordance with the law.”

Ojaomo further stated that “nobody is saying Magu cannot be replaced but the question is; was justice done to the man and others? Those who are holding the mantle of authority today should fear more because they have also created an avenue for any person coming after them to use the same means for vengeance.”