A gang called “New Money So Sick” was behind a series of brazen, violent crimes across the GTA in recent years, Peel police officials said Tuesday while announcing dozens of arrests.

That includes the highly-publicized shooting of 17-year-old Jonathan Davis — an innocent bystander who was gunned down in broad daylight in Malton in 2019 — as well as the shooting death of 28-year-old Giovanni Delahaye in Mississauga.

“This organization has been linked to some of the most thoughtless violence our community has suffered for the last several years,” Duraiappah said.

The investigation began back in September of 2019, when officers started looking into a drug delivery network operating out of Mississauga and Brampton.

Police eventually discovered the gang was linked to a large-scale drug trafficking network across the GTA that was moving large quantities of cocaine and fentanyl, Duraiappah said.

Police say they have executed 83 search warrants in the region in connection with the group, and 88 people have been arrested.

Duraiappah said police are expecting that more than 800 charges will be laid in connection with their investigation, including participating in a criminal organization, firearms offences, drug possession and trafficking, murder, and conspiracy to commit an indictable offense.

Thirty-four guns have been seized, the chief said, alongside over $1.39 million in cash and $1.9 million worth of drugs, including 1.4 kilograms of fentanyl, 13.7 kilograms of cocaine and 187 kilograms of marijuana.

“We believe the seizure of these firearms has saved lives,” Duraiappah said.

Supt. Martin Ottaway laid out how the gang was involved in Davis’s death during the news conference Wednesday morning.

Ottaway said that on Sept. 14, 2019, a rival gang was gathered at the back of the apartment building where Davis lived in Malton. Two vehicles drove around back, and that’s when seven people all got out and started shooting at the group. Police say this was all part of an ongoing gang conflict.

Six people were struck, including Davis, who died.

“Jonathan was not involved in any gang crime, and was an innocent victim who found himself caught in the middle of gunfire,” Ottaway said. 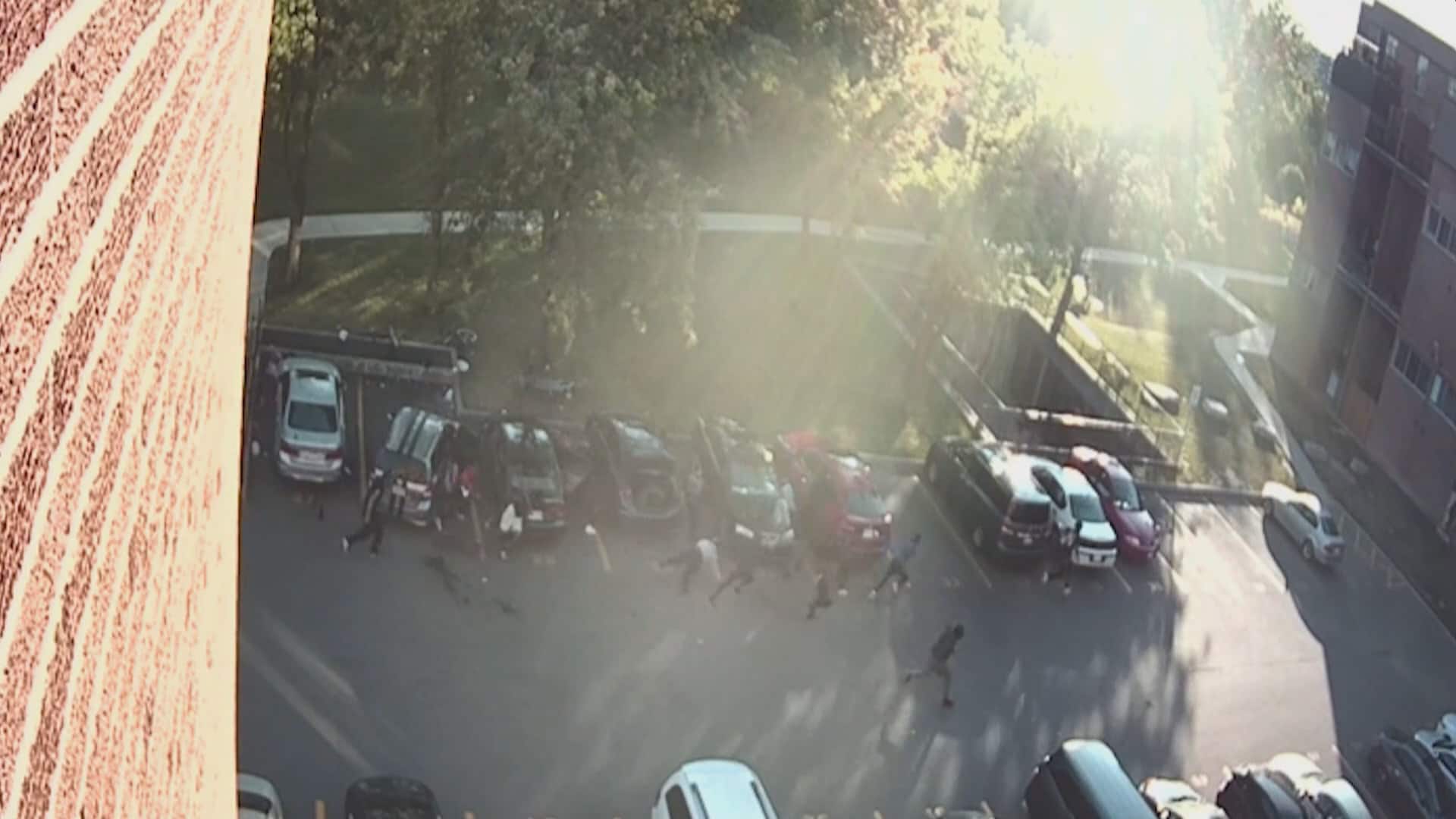 WARNING: This video shows the moments a gang opened fire at a Brampton apartment complex in 2019. Peel police announced today they believe that the shooting that left an innocent teen dead was part of an ongoing feud between rival gangs. 0:52

Police previously announced that Safeer Ahmad, 19, of Mississauga and Jahvon Valdez, 21, of Brampton have been charged with conspiracy to commit murder in relation to the deaths of both Davis and Delahaye.

Ottaway also laid out how Delahaye died in October of 2019. He was stopped at a red light in a vehicle with three other people in Mississauga when a car pulled up on the passenger side and two people opened fire, Ottaway said.

All four people inside the first vehicle were struck, and Delahaye was killed. The others were seriously injured, but survived. The two shootings were “forensically linked,” Ottaway said, and police eventually determined the same vehicle was used in both.

Also connected to cemetery shoot out

Police have also linked the gang to the shooting death of a man in Mississauga on Aug. 3 of this year. Police say the victim was a frequent customer of an illegal mobile pot operation called 6ixpensary that was being operated by the gang, and believe this association was a factor in his death.

Investigators say Mahmoud Al-Ramahi, one of the leaders of New Money So Sick, was arrested on Nov. 12 and charged with first-degree murder and conspiracy to commit an indictable offence in connection with that incident.

Al-Ramahi’s arrest comes after a recent attempt on his own life. Police said two men approached him on Oct. 29 while he was in a vehicle in Nobelton, north of Toronto, and opened fire. Al-Ramahi was able to take off and wasn’t hurt. That investigation is ongoing, Ottaway said.

The same gang has also been linked to a shooting in a Brampton cemetery from Aug. 31, police said. Members of New Money So Sick were at the cemetery, Ottaway said, to celebrate the birthday of a friend who had been murdered in 2016.

That’s when several people showed up and started shooting, which resulted in a gun battle with over 70 rounds fired. Three people were shot and taken to hospital, but survived.

Ottaway said that investigation is ongoing, and further arrests and charges are anticipated.

“We will not tolerate this within our community,” he said.