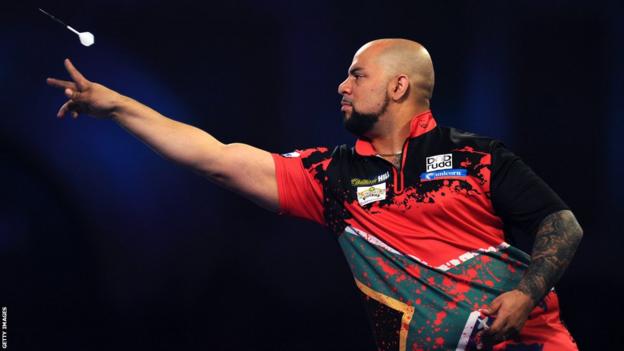 When the 2021 PDC World Darts Championships begin on Tuesday for the first time it will feature two South Africans.

Cameron Carolissen will make his debut at the tournament as the qualifier from Africa while his compatriot Devon Petersen earned a place as one of the world’s top 32-ranked players.

It will be 34-year-old Petersen’s eighth appearance at the global showpiece, having claimed a place in the past as the African qualifier.

He made history earlier this year as he became the first African to win a PDC title claiming the 2020 German Darts Championship.

Like boxing darts is known for its player introductions with each person having a theme or “walk-on” usually accompanied by some dancing to get the crowd cheering.

Petersen’s song is the 2010 World Cup anthem Waka Waka (This Time for Africa) and his dance moves have long been a crowd favourite.

“I am actually a real contender and can dance instead of a dancer that can play darts,” he told BBC’s Sportshour.

“Before I was a player that just participated and people valued the experience of ‘cool ok he can dance, he can play a bit of darts’.”

“To me (winning the world title) it would be a comparison when South Africa lifted the rugby World Cup in 1995 and Siya Kolisi again not so long ago.

“Me being the only African on tour is not testament to the talent we have.

“I was probably the most fortunate to come and find my way we couldn’t fathom how far it would reach and what kind of potential it would hold in the future but I know that it would be massive.

“Every time I have practiced I am always throwing the winning dart at the World Championships – I have missed it a few times and I have hit it a few times.

“Being the first African world champ and I think it would just change the landscape of the sport and sport in general.”

His dream of winning the world title began when he was a teenager in South Africa having grown up in a family of darts players.

“Our family is basically a dart playing family it started when my dad was young and they had a whole family team and they used to play in the local league together,” he explained.

“When I was 15 I could throw quite accurately and my dad said once I finish my schooling I could participate in the local leagues – the main thing was I had to finish school.

“At the time I think it would actually distract me from my school work and then very quickly I rose up the ranks in South Africa becoming one of Africa’s number one players I think in 2010.

“That’s when I moved over and made my debut at the 2011 World Champs – which obviously starts in 2010 and then ever since then history is continuing to write itself.

“I now find myself in the top 32 in the world which is fantastic. Still trailblazing and doing it for my continent and my country which is something I dreamt about but the dream hasn’t ended its just starting to get really tasty.”

Carolissen will make his debut against Martijn Kleermaker in the first round on Sunday while Petersen has a bye into the second round and begins his campaign a week on Tuesday.