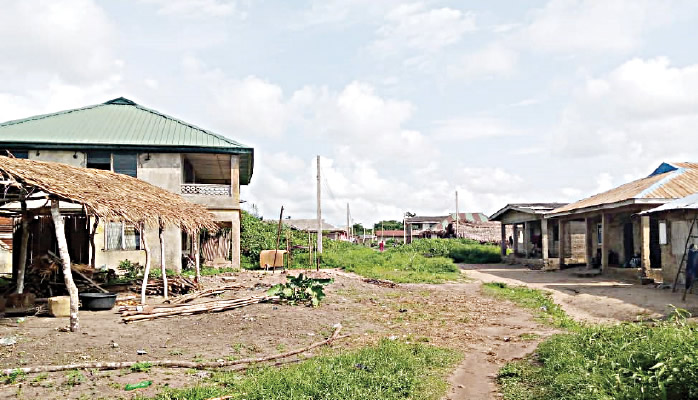 Residents of Oriba community in the Epe Local Government Area of Lagos State are facing a tough time with the complete absence of basic health facilities. LARA ADEJORO reports how residents of this off-grid community across the river are surviving with a century-old abandoned health centre.

Journeying through the waters from Itokin to Oriba can be a perilous trip, especially for first-time visitors. It usually takes a couple of men to push a canoe off the shoreline to the deep river to launch a 45-minute ride to the community.

Beside the river is the Flight 086 Memorial Arcade that the Lagos State Government built in 1996, in memory of the victims of the ill-fated ADC aircraft Boeing 727-231.

When our correspondent paid a visit to the community, the stark realities of a locality without a health facility was witnessed right from the beginning of the journey

Inside the canoe boarded by our correspondent was a shrouded corpse, accompanied by family members on their way to Oriba. The corpse was a male.

The corpse was their brother – ShamsudeenYinusa – who had died early that morning, after being rushed in a canoe from Oriba to Agbowa General Hospital, Agbowa, Lagos.

According to the family members, Yinusa started vomiting in the night, and because Oriba has no doctor or nurse or a functional health centre, he was rushed to Agbowa but eventually died.

These communities, reeling under deprivation, poverty and hunger, only have their fishing and farming enterprise to cling on to.

Aside from a public primary and secondary school, they are disconnected from basic life amenities such as potable water, electricity and a functional primary health centre.

The late Yinusa, in his 50s, happens to be one of the victims of the non-existence healthcare infrastructure in Oriba.

As narrated to PUNCH Healthwise, on June 13, 2021, Yinusa had retired to his house around 11 pm, after spending some time with his friends. He had hoped he would hand over the canoe he was constructing to his customer the next day when he suddenly fell ill.

He had rolled from his bed to the floor while gasping for breath, PUNCH HealthWise learnt. His family members and neighbours rallied around to save him but they could do nothing in the absence of a public health facility.

They had all stayed awake until 5 am the next day before they sailed him with a canoe to Agbowa General Hospital.

It takes over an hour to travel from Oriba toAgbowa. Yinusa died that evening.

“He was not sick; he was working on a canoe that day before he came back and was chatting with us before he went to sleep,” his relative, OwodeAkeem, said.

“But when his room partner went home around 3 am, he found him on the floor and he had vomited on the floor.

“That was when he screamed and alerted us. We did our best to revive him but nothing more could be done.

“If there had been a hospital here, he wouldn’t have died. We would have taken him to the hospital.

“It was not until yesterday morning around 5 am that we took him to Agbowa General Hospital but unfortunately, he died,” said Akeem.

Yinusa’s tragic death is an insight into how residents of Oriba die from treatable health conditions, as they are unable to get the medical attention they need.

According to PUNCH Healthwise findings, two weeks before Yinusa’s death, the community had lost another man, Mr. LawalAshamu.

OlatunjiOlorunsanya, who is Ashamu’s grandson, said he had been at a meeting inEpe on that fateful day when he was called that Baba was feverish.

“It was on a Sunday and I was about to come to see him when I was called. I learnt he passed on 30 minutes after the call.

“Had it been that the primary health centre we have here was functional, they might have saved his life,” said Olorunsanya.

If the situation is bad for those who suddenly fell ill, it is most times worse for pregnant women who need ante-natal and post-natal care. They are left with no option than to seek help from traditional birth attendants or give birth to their babies while being sailed in a canoe to the nearest health centre.

AsisatRasaq, 25, is one of such women, as she recently birthed her twins in a canoe.