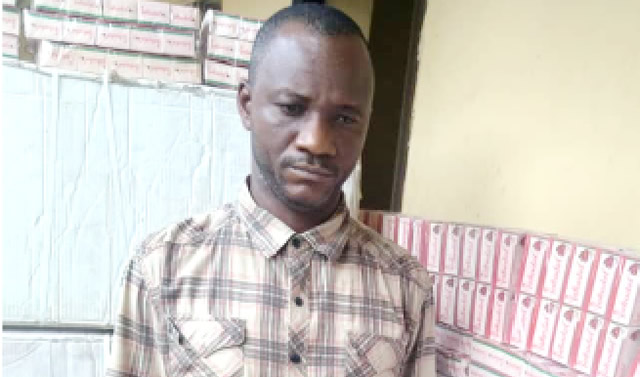 The suspect was allegedly caught with 548,000 tablets of Tramadol.

The NDLEA Director of Media and Advocacy, Femi Babafemi, in a statement on Sunday, said the Tramadol, branded as Tarkadol, was recovered from Okeke’s warehouse on Atunya Street, Maryland Estate, Nkwelle, Oyi.

He noted that the arrest of 44-year-old Okeke on Saturday, July 10, 2021 followed “credible intelligence and surveillance, which confirmed he stocked his warehouse with the illicit drug.”

“After the search of his warehouse, 548,000 tablets of Tarkadol weighing 302.500 kilograms were recovered. The suspect accepted ownership of the substance recovered.

“Preliminary investigation has established that Tarkadol is a brand of Tramadol that has just been introduced into the market to evade attention. The substance has also tested positive for amphetamine.

“The drug was equally labelled 100mg pain reliever on its packs to avoid scrutiny, while laboratory tests confirmed it’s a 225mg drug. It was further discovered that the drug was manufactured in India and smuggled into Nigeria without NAFDAC number or certification. During the search of the warehouse, a double-barrelled pump action gun with three live cartridges, which licence expired since 2019, was also discovered and recovered,” Babafemi added.