Meng Wanzhou returns to court amid rumours of deal for release

Even as rumours swirl of a possible deal to end criminal charges in the U.S. against Meng Wanzhou, the Huawei executive will return to court Monday to listen to testimony from the police and customs officers involved in her Vancouver arrest two years ago.

Last week, the Wall Street Journal and Reuters cited unnamed sources in reports Meng’s U.S. lawyers are negotiating with the U.S. Department of Justice to reach an agreement that would allow her to return to China in exchange for an admission of wrongdoing.

But with nothing concrete announced and no timeline evident, Meng’s Canadian legal team and lawyers for Canada’s Attorney General have no choice but to continue the extradition proceedings that have been playing out in B.C. Supreme Court since December 2018.

Vancouver-based immigration lawyer Richard Kurland, who has followed the case closely, said he believes the leaks that prompted last week’s news stories were intended to test the waters for a possible solution to a case that has wreaked havoc on relations between Canada and China.

“It provides an opportunity for the politicians to poll the public,” Kurland said.

“If there’s a tsunami of public opinion in favour of shutting this case down, Ottawa and Washington can very quickly come to an accommodation.”

Believes ‘she did nothing wrong’

Meng, 48, who is Huawei’s chief financial officer, was arrested at Vancouver’s airport on Dec. 1, 2018 after arriving on a flight from Hong Kong on her way to Mexico City and Argentina.

The United States wants her extradited to New York to face charges of fraud and conspiracy related to allegations she lied to an HSBC Holdings Plc executive in August 2013 about Huawei’s control of a subsidiary accused of violating U.S. economic sanctions against Iran.

Prosecutors claim that by relying on Meng’s alleged lies to continue handling finances for the Chinese telecommunications giant, HSBC placed itself at risk of loss and prosecution.

Meng has denied the allegations against her, but according to the Wall Street Journal, Meng’s lawyers and the U.S. Department of Justice have been in discussions about entering into a deferred prosecution agreement — a legal instrument that could see the U.S. defer and later drop the charges.

According to the report, “Meng has so far resisted the proposed deal, believing she did nothing wrong.”

CBC has not independently verified reports of the negotiations. Meng’s Canadian legal team had no comment. The news appeared to catch Huawei’s Canadian employees off guard.

‘She should hold out’

It wouldn’t be the first time the subject of a deferred prosecution agreement has played a role in the extradition case.

In court documents filed this summer, Meng’s lawyers noted that HSBC paid a $1.9 billion US fine and entered into a deferred prosecution agreement in 2012 “related to its own independent misconduct, including in relation to violations of U.S. sanctions law regarding Iran.”

Two of the other banks named as victims in the case have also been subject to similar agreements.

Kurland said evidence emerging out of the Vancouver extradition proceedings about alleged violations of Meng’s rights have given her a relatively strong negotiating position.

Meng is a co-defendant with Huawei in the case.

Kurland said he thinks the U.S. might drop charges against her while reaching a deal with the company similar to one that saw another Chinese telecommunications firm, ZTE, pay $1 billion US in 2018 to settle sanctions-related allegations.

“She should hold out,” Kurland said. “There’s no reason to play her cards right now when President Biden is around the corner.”

On Friday, Prime Minister Justin Trudeau refused to comment on the reports of a possible deal. He reiterated his concern for the safety of Michael Kovrig and Michael Spavor, two Canadians who have been imprisoned in China since days after Meng’s arrest. 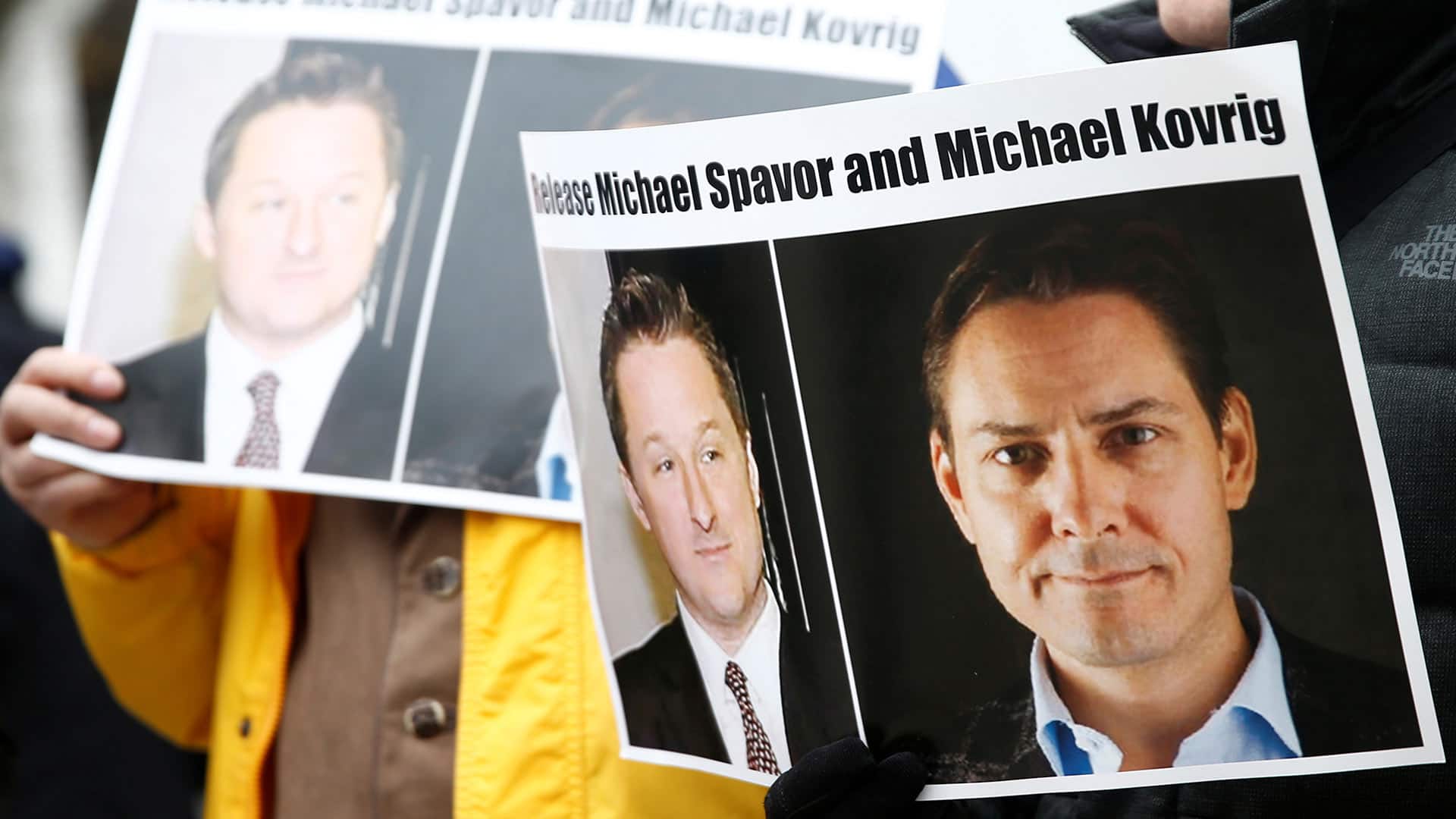 The fate of two Canadians imprisoned in China may hang in the balance, as the U.S. reportedly seeks a plea deal with Meng Wanzhou, the Huawei executive who’s been in Canadian custody for two years. China’s foreign ministry reacts to these developments as Canada remains pointedly silent. 3:42

China has accused the two men of spying, but has released no evidence to back up the claim. Most observers believe they were taken in retaliation for Meng.

The RCMP officer who oversees the RCMP’s Vancouver airport detachment is to continue his testimony Monday under cross-examination by veteran lawyer Richard Peck.

Sgt. Ross Lundie is one of 10 RCMP and Canada Border Services Agency (CBSA) officers expected to give evidence about Meng’s arrest.

The defence has accused the two agencies of conspiring with the U.S. Federal Bureau of Investigation to have customs agents question Meng without a lawyer for three hours before the RCMP arrested her and cautioned her of her rights.

During that time, the CBSA also seized Meng’s phones and gave the pass codes to the RCMP, allegedly by mistake. The defence has accused the RCMP of sending technical information about the devices to the FBI in violation of extradition law.

In prior testimony, Lundie said it was his idea to have the CBSA question Meng for immigration purposes because they are the “gatekeepers” to Canada. He said he thought a previous plan to have police officers arrest Meng on the plane was a bad idea.

The RCMP and CBSA witnesses have maintained that they were respecting each other’s jurisdiction and were not directed by the FBI.

The CBSA’s chief of passenger operations for Vancouver, Nicole Goodman, is also expected to testify later this week. The Crown says it may want to call more witnesses to rebut some of the earlier testimony.

Meng’s lawyers plan to use the evidence gathered during these proceedings at a hearing next spring, where they will ask the judge to toss the case.

At that time, the defence will also argue Meng is being used as a bargaining chip in a trade war between the U.S. and China and that the U.S. misled Canada about the strength of its case.