Manitoba Premier Brian Pallister is vowing to ramp up COVID-19 enforcement, and says his government is “seriously considering” imposing a curfew, but an infectious disease expert questions whether it’s all coming too late.

“These late-night situations in Winnipeg have expanded our number of COVID cases significantly,” Pallister said Monday morning. “According to Dr. [Brent] Roussin, this is an action that we should seriously consider, and I am seriously considering it now.”

Pallister made the announcement at a news conference on the first day Winnipeg and the surrounding area were placed under heightened pandemic restrictions.

The region moved into the red, or critical, stage of the provincial pandemic response plan as of Monday. Movie theatres, libraries, sports facilities, restaurants, bars and dining rooms are closed for at least two weeks, among other restrictions.

Hospital visits have been suspended amid multiple hospital outbreaks and an intensive care unit system that is nearing capacity.

The premier urged Manitobans to restrict the number of personal contacts they have by 75 per cent for the month of November.

‘COVID is beating us’

Over the past four days, Manitoba has reported 1,382 cases of COVID-19, including 241 new cases on Monday — the fourth highest number reported in a day.

“If we do not reverse this trend, we will see many more deaths, we will see strains on our health-care system,” Roussin said.

Winnipeg is in the midst of a COVID-19 surge that has raised dire concerns from experts about Manitoba’s health-care capacity.

A series of incremental restrictions rolled out just over a month ago has done little to stem the spread.

“Some of us lost our way, and now COVID is beating us,” Pallister said. “Perhaps we were cursed by our early success.”

WATCH | Pallister implores Manitobans to reduce their number of contacts: 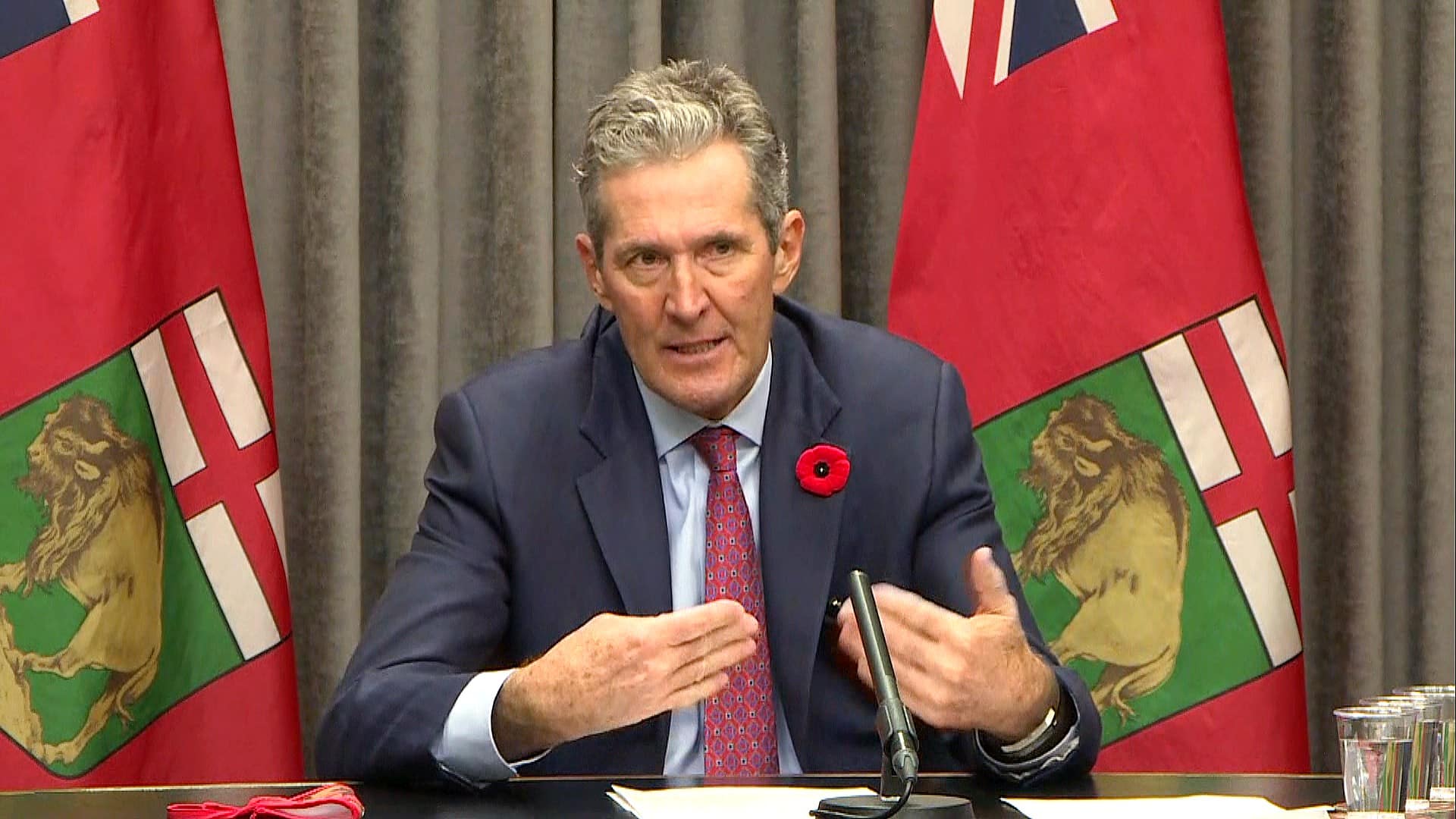 Manitoba Premier Brian Pallister thinks the province can and should do more to enforce public health orders. 1:04

Pallister doesn’t think past efforts to increase enforcement have worked sufficiently well. He suggested more people need to be fined and pointed to recent examples:

“That is totally unacceptable,” he said.

“It’s clear that talking about enforcement is not the same as doing enforcement, and so we need to step up.”

“You can’t ticket or fine your way out of a pandemic,” said Jason Kindrachuk, an assistant professor and the Canada Research Chair in emerging viruses at the U of M.

“We are somewhat a little bit late to the game,” he said.

Pallister said he plans to release more details about enforcement plans later this week. He’s asking Manitobans to weigh in online on the idea of a curfew. 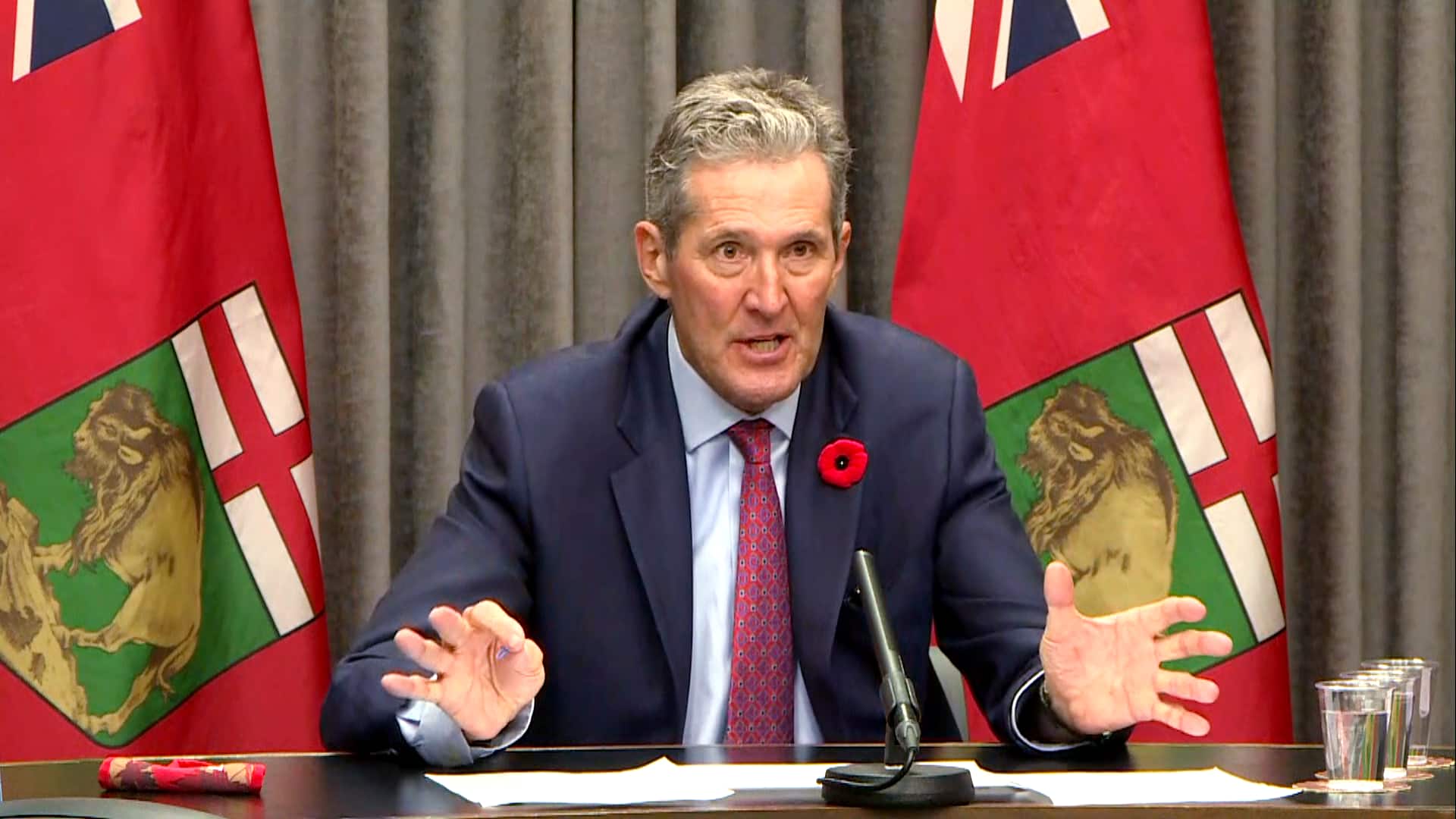 Premier Brian Pallister is mulling a curfew to curb the rising number of COVID-19 cases in Manitoba. 1:24

Winnipeg Mayor Brian Bowman said his government learned of the possible curfew Monday and has no details from the province in terms of how it will be implemented in the city.

“If the province feels this is the right thing to do, I would encourage them to just do it and not wait another day for a survey,” he said. “The virus doesn’t take a night off.”

The province has been criticized for not having a more robust response to the second wave.

Two groups of doctors have penned letters to the premier and health minister in recent days imploring them to act swiftly to bring COVID-19 numbers down or risk “grave peril” in the health-care system.

She said 94 per cent of Manitoba’s ICU capacity was full as of Monday. Nearly a quarter of the 75 ICU beds in use are COVID-19 patients.

Elective surgeries have been suspended.

Opposition NDP Leader Wab Kinew said Pallister failed to act quickly enough on reinforcements, or to ensure hospital capacity was there, heading into a fall season experts predicted would bring a second wave of COVID-19.

“I think Manitobans have lost confidence in this premier’s ability to manage the pandemic,” Kinew said.

“Every measure that he said that he’s thinking about doing today are things that should’ve happened weeks ago, and worse, he ignored the No. 1 priorities out there.”

The province moved forward with an economic agenda this summer following weeks of few or no cases.

During question period at the Manitoba Legislature, Kinew said the province should have invested in ramping up testing and contact tracing capacity then.

Pallister said that “would’ve been idiocy,” as the province had “no COVID cases.”

He touted the province’s attempts to improve contact tracing and testing over the past several weeks, following weeks-long backlogs.

He said three large sites have been added in the past week, which have increased daily testing capacity by 40 per cent.

An appointment-based COVID-19 test-booking system has registered 10,000 appointments since it was unveiled on Oct. 20. Wait times in that system are less than one minute, the premier said.

Manitobans will have a total of 30 sites in the coming weeks, and that will increase testing capacity to 4,250 per day.

Monday’s news conference marked the first time the premier has spoken publicly since the enhanced restrictions for the province were announced last week.

Pallister did not speak at a Friday news conference announcing the new measures, and instead issued a news release after the public health update.