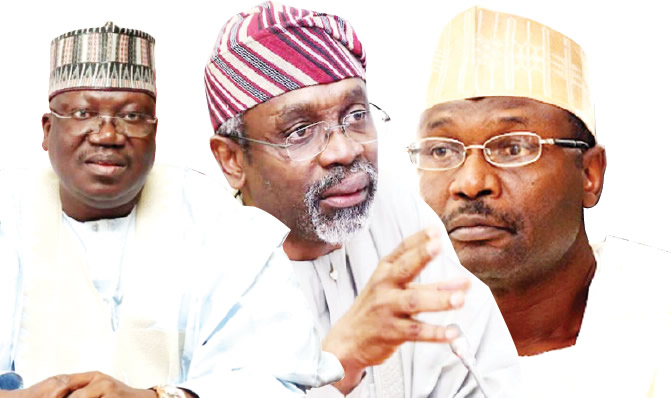 Despite the rejection of electronic transmission of election results by the National Assembly in the Electoral Act (Amendment) Bill, the use of the technology will be feasible in the deepening of democracy in Nigeria, the Independent National Electoral Commission said on Saturday.

The commission premised its optimism on the fact that its joint committee made up of telecommunication stakeholders had revised the system and concluded that electronic transmission of results was practicable.

INEC National Commissioner and Chairman (Information and Voter Education Committee), Festus Okoye, expressed these views in an interview with Sunday PUNCH in Abuja.

“The Joint Technical Committee constituted by the commission and the Nigerian Communications Commission and made of telecommunication operators met on March 9, 2018, and the consensus was that the requirements for the electronic transfer of results proposed by INEC is practicable. The meeting, therefore, agreed that the solution that INEC wants to deploy is possible.

“We have the assurance of the service providers that they have provided similar technological solutions to other agencies and have the capacity to deploy technology to cover a few blind spots.

“The commission will continue to pilot different solutions bearing in mind that technology is dynamic and can limit human interference in the electoral process. The commission wants broad powers to deploy technology and is not in favour of a particular solution being written into the law.

“The commission has piloted and continues to pilot various electronic solutions that will improve the integrity of the electoral process. Presently, all the registered political parties upload the list and personal particulars of their nominated candidates electronically.”

Okoye stated that domestic election observers and the media applied for accreditation to observe and cover elections electronically and that henceforth, political parties would submit the names and photographs of their polling agents electronically.

He said, “The commission uploads Form EC8A, being polling unit results to a central viewing portal. Since 2020, the commission has been uploading these results from different parts of the country.

“Currently, the commission is carrying out part of the continuous voter registration exercise online, while the physical registration of voters will be done using INEC Voter Enrolment Device that will capture the fingerprints and facials of registrants.”

The House of Representatives had on Friday passed the Electoral Act (Amendment) Bill, maintaining the controversial Clause 52(2) as presented amidst protests, especially by members of the minority caucus.

The clause gives the Independent National Electoral Commission the discretion to determine when, where and how voting and transmission of results will be done.

After the passage of the bill, the Speaker, Mr Femi Gbajabiamila, criticised the proposed electronic transmission of election results, saying it was not feasible in the country for now.

“I want to use this opportunity to talk to people out there … We all want electronic transmission of results, but based on the information from experts, it is not as easy as it sounds. We must get our electoral process right and when the time is right, we can come back and amend the law.

The Senate also had on Thursday passed the long-awaited Electoral Act (Amendment) Bill, 2021 after division among its members on the electronic transmission of results.

After voting, the red chamber ruled out the possibility of having results transmitted electronically when it voted that the NCC, with the National Assembly’s approval, would determine whether INEC could transmit results electronically or not.

Many Nigerians criticised the National Assembly for the non-acceptance of the electronic transmission of election results.

Sokoto State Governor and former Speaker of the House of Representatives, Aminu Tambuwal, faulted the Senate’s decision to grant the NCC the power to determine the electronic transmission of results.

He described the Senate’s decision as “unconstitutional,” saying the mode of conducting elections and the transmission of votes should be left with INEC.

“The decision of the Senate to subject INEC constitutional power to conduct elections to the Nigerian Communications Commission and National Assembly is patently unconstitutional. For the avoidance of doubt, Section 78 of the Constitution provides that ‘the registration of voters and the conduct of elections shall be subject to the direction and supervision of the Independent National Electoral Commission.’

“In the Third Schedule, Part 1, F, S.15: INEC has the power to organise, undertake and supervise all elections. The constitution further provides that INEC operations shall not be subject to the direction of anybody or authority.

“Unquestionably, the mode of election and transmission are critical parts of the conduct, supervision, undertaking, and organisation of elections in Nigeria. Of course, the National Assembly has the power to flesh out the legal framework but that has to be consistent with the Constitution,” Tambuwal said in a statement.

Meanwhile, the candidate of the Young Progressives Party in the forthcoming November 6 governorship election in Anambra State, Senator Ifeanyi Ubah, said he staged a walk-out from the Senate chamber on Thursday due to the attitude of the Senate President, Ahmad Lawan.

Ubah, who is representing Anambra South Senatorial District, is one of the 28 senators who abstained from the physical headcount over the electronic transmission of election results.

He stated this on Saturday in a statement titled, ‘Putting the record straight on electronic transmission of election results: My standpoint.’

He said the Senate President frustrated his efforts to raise a point of order over the controversial issue.

He said, “In line with parliamentary practice, I walked out of the Senate chamber in protest to register my displeasure; hence my absence during the voting session.

“Before walking out of the Senate chamber, I didn’t fail to tell the Senate President how disappointed I was by his action. It is my earnest belief that the use of technology in elections can significantly improve the efficiency and transparency of electoral conduct in Nigeria.

A former National Commissioner of the Independent National Electoral Commission, Prof Lai Olurode, has also described the passage of the Electoral Act (Amendment) Bill 2021 as half-hearted and would not do the public much good.

Olurode, who is also a former Head, Department of Sociology, University of Lagos, said this in an interview with one of our correspondents in Ibadan, Oyo State capital.

He said the condition attached to the approval for electronic transmission of election results which mandated the INEC to get approval from the NCC was a way of eroding the autonomy of the electoral commission.

Olurode said, “The first thing I can deduce is that the National Assembly is still not comfortable with overhauling the whole Electoral Act in a way that will make further transparency of our electoral process visible and possible.

“In summary, it is like Nigeria will still continue to go through electoral ordeals, the waiting time for harvesting result is so much and sometimes, people sleep at collation centres for days because they are waiting for results from one remote part of the country.

“Therefore, for me, what they have done is a half-hearted amendment that will not serve the public good as much. Let me say this to the credit of the National Assembly, a wholesale electronic transmission of results for the whole country is dangerous. If the transmission becomes impossible for reasons of difficulty because the machines are not cooperating, the whole country will be held to ransom. There will be apprehension and trepidation.

“A party will believe because we are winning and that is why they are failing in transmitting the results electronically and that can set the country ablaze. But you cannot give with one hand and take with the other hand.”

Olurode said he preferred the first amendment which stated that INEC might transmit results of elections by electronic means where and when practicable.

He said the second amendment which would now mandate the electoral commission to first go to the NCC and come back to the lawmakers for ratification to transmit results was like placing obstacles in the way of credible polls.

Also, a Professor of Political Science at the Adekunle Ajasin University, Akungba Akoko, Ondo State, Lanre Olu-Adeyemi, faulted the passage of the Electoral Amendment Act Bill by the Senate which asked INEC to seek clearance from the NCC and the National Assembly before deploying electronic transmission of results.

The don said the action of the senate was unconstitutional and not good for the democracy of the country.

He said, “The INEC is properly constituted by law to have the power to conduct elections in Nigeria. The law gives all powers concerning the election to INEC, which also includes the power to transmit and announce the final results of the election.

Also, a Political Science Professor at the Ekiti State University, Ado Ekiti, Femi Omotoso, said for another government agency to determine INEC’s duty would pose problems for the smooth conduct of elections.

He said, “I am afraid politics is blindfolding us for us not to see the benefits derivable in some of these things which can take us to the desired end. As it is now, the electoral system will still remain the same whereas there is a need for us to improve every now and then so that we can have free, fair, credible and transparent elections.

In his submission, the Head of Political Science Department at the University of Jos, Dr Major Adeyi, maintained that the rejection of electronic transmission of election results was an “unholy way” of discrediting government investment in Information and Computer Technology.

According to him, the action by the Senate was “a setback to the electoral process in Nigeria.”

He said, “This action again will expose our electoral process to the democratic world that the giant of Africa is still crawling in the field of technology. If the globalised world is moving towards embracing ICT and promoting election management to my mind, the rejection of electronic transmission is an arrogant display of ignorance, and it is a process that will build confidence among the citizens and election managers.

However, Emeritus Professor of Political Science at Bowen University, Iwo, Osun State, Bunmi Ayoade, stated that although the electronic transmission of election results was good, he warned that the idea should be jettisoned if the country would not be able to meet the technology demands of transmitting the results.

He said, “I honestly believe that transmitting election results electronically is good and worthwhile. It saves time, but you need to have the gadgets and the preventive measures to be able to cope with it.

A constitutional lawyer and human rights activist, Dr Mike Ozekhome (SAN), also slammed the National Assembly on Saturday for rejecting the electronic transmission of election results, describing it as a national tragedy.

While accusing NASS of murdering democracy in Nigeria, Ozekhome regretted that the concept of democracy was no longer in practice in the country.

The lawyer faulted the NASS’ action while delivering a special lecture at the 2021 graduation ceremony/prize-giving ceremony of the Pacesetters School in Abuja.

He said, “The national tragedy in the last two days at the National Assembly is for the sole interest of politicians in order to rig elections.

“Why did we choose to kill electronic voting when across the world, even in the Democratic Republic of Congo, they are using it? You are even now making INEC to be no longer independent.”