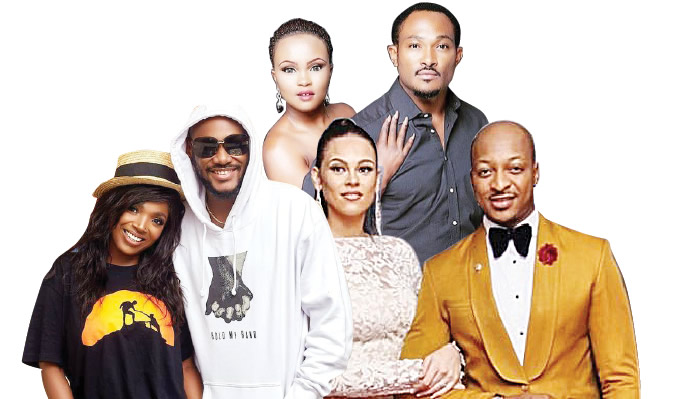 Many fans believe that celebrities in relationships live fairytale lives, but are usually shocked when such relationships hit the rocks without any telling signs. Saturday Beats takes a look at times when social media exposed cracks in celebrity marriages

When multi award-winning singer, Innocent Idibia, aka 2baba, finally decided to settle down and marry his long-time girlfriend, then-Annie Macaulay, his fans were excited because it seemed like the perfect ending to a love story that had endured many twists. Because the singer had had children with other women before he finally decided to get married, this raised some eyebrows, but many still commended him for eventually settling down with Annie who he had reportedly been dating before meeting his other baby mothers.

And just like a well-scripted romance novel, their marriage seemed to be made in heaven as the couple constantly showered encomiums on each other on social media.

However, Annie recently took to her social media page to call out her husband and his family, accusing them of not loving her. She also went as far as deleting ‘Idibia’ from her name and resorting to her maiden name (though she has since restored the marital name).

Many people chastised Annie for bringing her marital issues on social media. It was believed that if she had not brought it up, no one would have known what was happening in her marriage.

Meanwhile, 2baba has called for calm, asking that his family’s privacy be respected. He wrote, “I admit that bringing our personal issues to social media was not cool but I will not sit back and watch everyone have a free for all battle in the name of love and solidarity.

“None of us is perfect. I will like to urge our families and supporters to stop the madness and the public to please respect our privacy and our kids. Let us deal with our issues internally. I beg you all in the name of God (sic).”

This is one celebrity break-up that unravelled before fans’ eyes on social media.

Actor, Ikechukwu Ogbonna, aka Ik Ogbonna, met Sonia Morales, a Columbian, on Instagram. They kicked off their romance and eventually got married, with the union producing a son.

While there were no clues pointing to their imminent break-up, Sonia, who had been off social media months before, broke the news of their divorce on Instagram.

She wrote, “Many times, I felt miserable on the inside and cried my eyes out day and night in my room alone but as time went on, I outgrew the reality and I was passing through the years.

“I want to use this medium to thank my ex-husband for not prolonging the hardship and now, I have to face the world on my own. Our son will forever be a representation of you in my life.”

Since the end of their four-year union, IK has not commented on the events that led to the break-up.

When actor, Blossom Chukwujekwu, and actress, Maureen Esisi, got married, it represented the ‘ideal’ union for many. Public displays of affection were not lacking between them, especially on social media.

But, when news of the break-up of their three year-old marriage surfaced, many found it hard to believe. However, when fans observed that they had ‘unfollowed’ each other and deleted pictures of themselves on social media, it looked real.

Had the story not made its way to social media, there would have been doubts of the break-up.

Gbenro Ajibade and Osas Ighodaro are two Nollywood stars who had a two-part glamorous wedding in New York, USA, and Edo State, Nigeria.

The marriage was blessed with a child and it felt like all was well until Gbenro called out his wife on Instagram for allegedly neglecting their daughter, Azariah.  Many found this unusual and though it might not have given a clue to an eventual divorce but it showed that all was not well with their union.

Months after the incident, Gbenro revealed that he and Osas were divorced after they had been married for only three years, and they were now co-parents to their daughter.