The 37-year-old believes there is a misconception that black keepers lack technique, which has made it difficult for Africans to get signed by clubs in Europe.

Like Vincent Enyeama, Nigeria’s most-capped and successful goalkeeper, Aiyenugba established himself in Israel during a 13-year stint but was not able to follow his compatriot with a move to Western Europe.

“It’s not as easy as people think, because I tried leaving Israel but faced the usual problem about lack of trust,” Aiyenugba, who is now back in Nigeria with Kwara United, told BBC Sport Africa.

“The big challenge is that European clubs don’t believe in African goalkeepers.

“We are blessed with great positioning and reflexes, but they often say we don’t have great technique. Back then things were difficult because you pack power in your legs but lack the required technique to excel.

“You also had to be playing in the national team to earn some attention or respect but now it’s much better.

“You can play a youth tournament and catch the eye but the lack of trust was obviously a big challenge.

“You often have to work extra hard to make it to European football then you find out on getting there that it’s not so easy to convince top European clubs.” 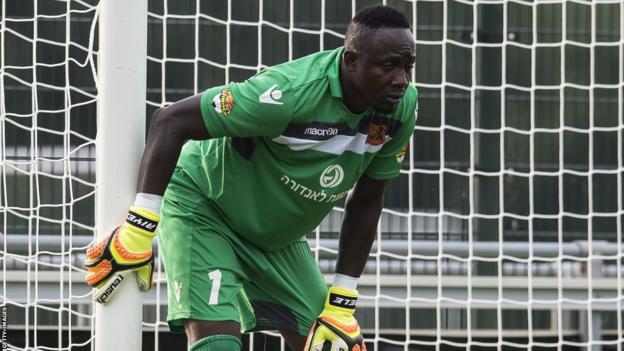 Aiyenugba is now back in the Nigerian Premier League with Kwara United, where he began his career before enjoying success at Enyimba during a six year stint.

He was in the Enyimba squad which won the African Champions League in 2003 and 2004.

The hero of the continental success in 2004 when Enyimba defeated Etoile du Sahel of Tunisia in a penalty shoot-out – to equal the 36-year-old record of Tout-Puissant Englebert as the only side to successfully retain the Champions League title.

He moved to Bnei Yehuda in 2007 as a replacement for Enyeama and played for Hapoel Ashkelon, Hapoel Iksal and Hapoel Afula before his departure in January.

Aiyenugba believes things are gradually changing thanks to the black African goalkeepers now playing in top leagues in Europe.

“I think now things are changing. You can see African goalkeepers making waves in other top European league unlike in the past,” he added.

“Chelsea’s first choice [Edouard Mendy] is Senegalese. Ajax have had a Cameroonian [Andre Onana] in goal for a while now.

“It’s a positive sign that things are beginning to look up for African goalkeepers. Now a lot of academies are springing up in Africa and emulating Cameroon who have always produced top goalkeepers.

“You just need to keep pushing yourself and show what you’re capable of doing to earn trust and confidence.”

An African Super Cup winner in 2004 and 2005, BBC Sport understands that Aiyenugba rejected offers from some lower leagues in Europe to return home.

“Two things made me return. The first is my family, I’ve missed them and I have a 14 year old son, Daniel, who is one of the finest youth goalkeepers in the country right now.” he said.

“I returned home to pass my knowledge to him.

“The other reason is because I want to help my hometown club return to better days. They’ve been trying to stay in the top league and I want to help them.”

‘Not about the money’

Nigerian clubs are infamous for not paying players and coaches on time, but Aiyenugba insists that money was not the reason he returned to Nigeria.

“It’s not about money all the time, sometimes it’s about honour and giving back to where you started from,” he explained.

“I just want to give back to the city that groomed and supported me and gave me a start in football. I want to speak to others about this profession.

“Young people are in a rush. I want to teach them to start from somewhere because you can’t build a house in a day.

“I started from the streets, youth clubs, youth leagues, state league but many upcoming players don’t want to go through all that.

“It’s also important to share my experience with the young players. I know it’s not easy because many people don’t want to start from the scratch, all they care about is just leaving the country for anything that is abroad.”

After representing his country at youth level, Aiyenugba faced a tough competition at senior international level with competitions from Enyeama and Austin Ejide.

Capped 27 times, Aiyenugba was part of the 2010 World Cup squad for Nigeria but failed to pay in South Africa.

“I feel blessed with all I have achieved,” he added.

“It is what it is. We had top two goalkeepers in Ejide and Enyeama and pushed each other. We knew Enyeama was number but we keep him on his toes.

“Nowadays people can try out different goalkeepers. Imagine the last Nations Cup Nigeria made use of all three keepers.”

Not ready to quit at 37, Aiyenugba is confident he still has more to give.

“It all depends on my body and God’s grace to keep playing. I can’t decide when to stop because I want to put myself through training,” he insisted.

“In Israel I had a goalkeeper trainer who retired at 40 then return to win the championship at 43, so it depends on your mind and how you take care of yourself.

“I just want to try to give back to the club. Try to help them earn a ticket to play in the Caf competitions.

“The state government is putting everything into it and the coaching crew is highly experienced and ready.”