Club World Cup: Ahly coach Pitso Mosimane says ‘We could have won with Mane and Salah’ 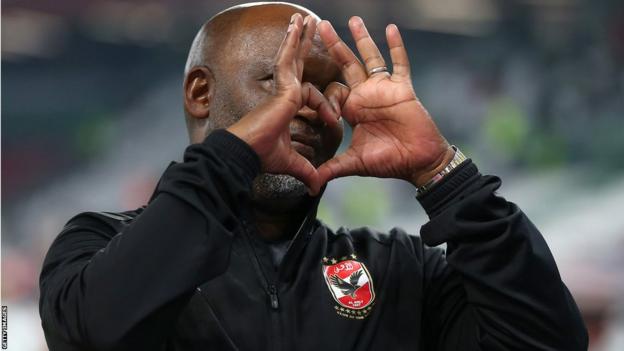 Al Ahly coach Pitso Mosimane is proud of his side’s third place at the Club World Cup and that with a player like Sadio Mane and Mo Salah the Egyptians could have done even better.

Al Ahly began their campaign with a 1-0 win over local champions Al Duhail and then lost 2-0 to Germany’s European champions Bayern Munich, who went on to win the title by beating Mexico’s UANL Tigres.

“It’s a World Cup, so if you come third so I think Africa should not be disgraced about us becoming third. At least we got a medal.” Mosimane said after the win.

“We defeated the Conmebol (South American) champions also it’s a milestone and we won two out of three games and the game we didn’t win, I mean, very difficult to win that match.

Mosimane insisted that he arrived at the tournament determined to win the title.

“You know, we played a team that’s very strong Bayern (Munich)… Maybe if I had Sadio Mane the Senegalese and Mohamed Salah from Egypt, maybe we could have talked a different talk when we played Bayern (Munich).

“So let’s be honest and accept what we are and where we are and a little bit of humility and respect for football.

It was the third time Al Ahly had played in the bronze medal match in their six appearances at the Club World Cup having clinched third 2006 but losing six years later.