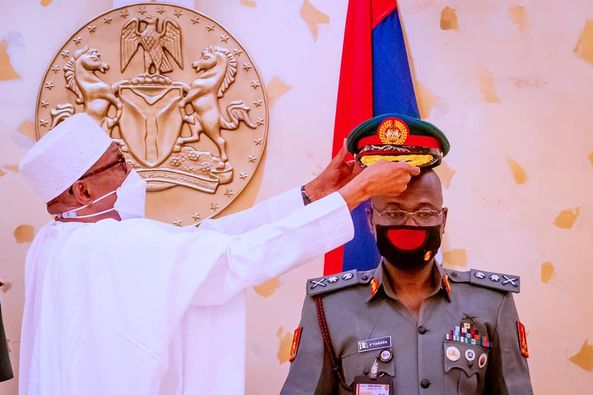 ADELANI ADEPEGBA X-rays the insecurity bedevilling the country under the watch of the President, Major General Muhammadu Buhari (retd)

When Major General Muhammadu Buhari (retd) promised during the 2014 election campaign that he would bring his experience to bear and defeat Boko Haram within months of assuming the leadership of the country, not a few Nigerians saw him as the solution to the nation’s woes.

The ship of state was almost capsizing as it struggled to survive the waves of attack by the Boko Haram insurgents.

Then Commander-in-Chief, Goodluck Jonathan, appeared to have run out of ideas as terrorists strengthened their hold, expanded their territory and carved out a caliphate in the North-East, while unscrupulous officials pocketed millions of dollars from fake ceasefire arrangements the ex-president allegedly approved.

Desperate for solutions, Jonathan clutched at every promises and offers that could stop the locusts sweeping down the Northern plains. The situation was critical, Nigerians were indignant, and the president was desperate as his chances of re-election evaporated. In a last-ditch effort, South African mercenaries were engaged to turn the tide of defeat and prevent a political rout but the move was a little too late.

Riding into power on the back of the people’s disenchantment, the new ‘Sheriff’ pledged to tackle insecurity, fight corruption and grow the economy. But six years down the line, the retired general appears to have failed to make an impact where it matters most. He has also disappointed millions of his ardent supporters, some of whom trekked miles to demonstrate their devotion to him.

The dire state of insecurity is exemplified by the killing of Major General Hassan Ahmed, former Provost Marshal of the Nigerian Army during the tenure of Lt Gen Tukur Buratai, on Thursday by suspected kidnappers along the Lokoja-Abuja highway.

The general, who was recently posted to the Nigerian Army Resource Centre, Abuja, was reportedly coming from Okene when his car was attacked by the gunmen. His in-law was also kidnapped.

Ahmed’s death headlines the brazen criminality stalking the country under the regime of Buhari.

Analysts who have expressed frustration with his regime unanimously agreed that the ageing retired general was not actually prepared for governance. They pointed at the growing insecurity, the flagging anti-graft campaign and the lack of clear policies on the economy, including the controversial fuel subsidy through which billions of naira was being pilfered under his watch.

Due to the inability of the Federal Government to keep Nigerians safe, various regional security outfits have evolved as a buffer against the rampaging killer herdsmen and kidnap syndicates operating across the nation. In what could be described as a vote of no confidence on the Federal Government, the South-West established the Western Nigeria Security Network codenamed, Amotekun; the South-East came up with Ebubeagu while the outlawed Indigenous People of Biafra inaugurated the Eastern Security Network.

Under the General’s watch, Boko Haram insurgents are now operating closer home to Aso Villa, the seat of power. Some weeks ago, the daredevils sacked and occupied scores of communities in Niger State, less than two hours’ drive to Abuja. There was panic at the National Assembly following intelligence reports that terrorists were plotting to attack the complex. The scared and worried lawmakers hastily held a long executive session to discuss the spate of insecurity, calling on Buhari to declare a state of emergency on security. No whimper has been heard from the Presidency regarding the resolution. Over 700 persons were believed to have been kidnapped since December 2020.

Despite sharing the same geographical space with the seat of power, this has not conferred any advantage or protection on rural communities in the Federal Capital Territory. The people practically live with their hearts in their mouths on account of the activities of kidnappers in their communities. Prayers and faith have been their only succour. The police claimed to have arrested several kidnap suspects but the force has been mum on the prosecution of the gang members, many of whom are usually released on bail after a stint in custody.

Many corrupt ex-governors and other indicted persons seemed to have wormed their way into the heart of the taciturn general. They were appointed cabinet ministers, board members or emerged as party leaders. Buhari, the acclaimed African Union anti-corruption champion, appeared to have developed a soft spot for the set of people he once vowed to battle to a standstill.  Not only that, a self-confessed Al Qaida and Taliban terrorist groups supporter, Isa Pantami, is still holding court as the Minister of Communications and Digital Economy.

In the area of forfeited assets, the Federal Government has been secretive about the disposal of assets and the amount realised from the sales. There are speculations that assets seized by the Nigeria Customs, the National Drug Law Enforcement Agency, Central Bank of Nigeria, the Economic and Financial Crimes Commission and other agencies could not be fully accounted for. Intelligence report indicates that top officials and their cronies may have expropriated some of the assets. It is believed that the ongoing probe by the House of Representatives may expose the shenanigans of the officials and their collaborators.

The Fiscal Responsibility Commission said Ministries, Departments and Agencies of the Federal Government are allegedly keeping N1.2 trillion in their coffers illegally. Chairman of the Commission, Mr Victor Muruako, told journalists in Abuja that the FRC arrived at the figure based on analyses of the annual audited financial reports of the agencies concerned. The Federal Government, it seems, was too lethargic to bring the MDAs to account despite complaining about the lack of funds.

When he became the President in 2015, Buhari appointed himself the oil minister and vowed to end fuel shortage, the result of an inefficient and graft-riddled fuel subsidy scheme. Caught between raising fuel prices and ending the subsidy payment which he earlier dismissed as fraudulent and bogus, the president chose a corruption-ridden compromise. He cut out the fuel marketers, and effectively made the Nigerian National Petroleum Corporation the sole importer of fuel. With this development, the nation was kept in the dark on the amount being spent on fuel subsidy which was hitherto made public under the Jonathan administration.

On March 25, the Group Managing Director, NNPC, Mele Kyari, said the Federal Government was subsidising Premium Motor Spirit with about N100bn to N120bn monthly. According to him, while the actual cost of importation and handling charges amount to N234 per litre, the government has been selling at N162 per litre, therefore, bearing the difference.

“Today, NNPC is the sole importer of PMS. We are importing at market price and we are selling at N162 per litre today. Looking at the current market situation today, the actual price could have been anywhere between N211 and around N234 per litre,” Kyari said at the time.

Petrol subsidy reportedly gulped N480bn from February to May, based on the monthly figure given by the NNPC boss, while the corporation is estimated to have spent at least N20bn subsidising the product in January.

“They are no longer deceiving us; they have told us the truth that there is subsidy. So, we will continue to carry the burden until the infrastructure to cushion the effects of high petrol price is put in place by the government,” he added.

Still, under the watch of the globe-trotting General, Nigeria became the world’s poverty capital. The nation also clinched the unenviable position of the third worst country in the world. And according to the National Bureau of Statistics, the jobless rate rose to 33.3 per cent in the last quarter of 2020. Nigeria’s jobless rate has more than quadrupled over the last five years as the economy went through two recessions.

On how to address the worsening security situation, a security expert, Col Hassan Stan-Labo (retd), said, “We must, as a matter of urgency, begin to address the inherent deficits currently suffered by this operation as it relates to the ‘big five’–funding, manpower, equipment, training, welfare and motivation.

“A good focus on the big five will reduce operational issues by 60 per cent. We must desist from politicising the fight on terrorism, we should call for immediate external assistance as it is glaringly clear we’ve been overwhelmed.’’

A retired Director, Department of State Services, Mr Mike Ejiofor, said Nigeria lacked the technical capacity to battle the terrorists alone without international support. According to him, the government cannot simply fold its hands while the citizens are being killed in hundreds.

The lawyer stated, “I fully endorse and support the recruitment of mercenaries if that would help us. We shouldn’t deceive ourselves; we don’t have the technical capacity to do this. So, we need to collaborate with other advanced countries with the capacity. The Federal Government should look for support, not only for mercenaries but for technical support. Terrorism is not something you fight locally; you need foreign partners.”

A security analyst, Mr Ben Okezie, also said there was nothing wrong with engaging mercenaries to assist the military in defeating the terrorists in the North-East, stressing that fighting terrorism required international support.