Kaizer Chiefs may be the most successful and best supported team in South Africa but they are yet to make an impact in continental competition.

Chiefs were the first club from post-apartheid South Africa to participate in the old style African Champions Cup in 1993 but this season marks the club’s first appearance in the group phase of the reformatted tournament.

This year’s continental campaign comes as the club struggles with poor form, injuries and a Fifa-imposed transfer ban, not to mention the global coronavirus pandemic.

Covid-19 means they are going to have to wait to start their group campaign after their opening game in Morocco against Wydad Casablanca, planned for Saturday, was postponed.

Chiefs’ departure was initially delayed as they struggled to secure their visas for Morocco – owing to the mutant strain of coronavirus in South Africa – before the South African FA (Safa) released a statement saying the game had been delayed.

Safa said the decision had come from the Confederation of African Football (Caf) who added it would “communicate the updated decision in due time.”

A change of mindset

The delay may be a blessing in disguise for Chiefs who have been struggling in the league and allow coach Gavin Hunt to get his team better prepared for the Champions League.

At his previous clubs SuperSport United and Bidvest Wits, Hunt admitted he had fielded weakened sides in the Champions League or the Confederation Cup.

“It was about limited resources and not being able to really compete on both the home and African front,” he explained.

But with Chiefs he says the instruction from management is “to try and win everything” and Hunt says the Champions League is an important assignment, and a way to engender much-needed confidence, but not at the expense of their league form.

“I went ‘wow’ when the draw was made and we were matched up against Wydad, who have been in two finals in the last few years,” Hunt told BBC Sport Africa. “That’s really tough although it would have been tough whoever we got.

“But we have to juggle it all a little bit because with our predicament of not being able to add any new players, we cannot afford to pick up injuries or suffer fatigue on the road in Africa to the detriment of our position in the league.”

“That makes it harder but we’ve got to go out there and try and do it and work it out as we go along,” he added.

As well as the game against Wydad, the South African side will take on Guinea’s Horoya and Angola’s Petro Atletico.

“We do have a chance in this group,” insists Hunt. 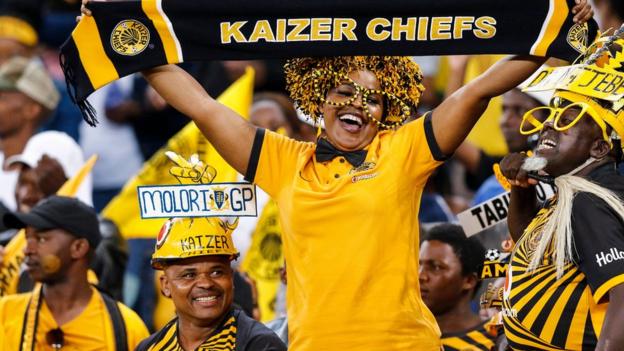 So far this season, one of the few highlights for Chiefs has been reaching the Last 16 of the Champions League thanks to a 1-0 aggregate win over Primeiro Agosto, which was achieved with a win in Angola.

This was in stark contrast to Saturday’s low point which came when they were bundled out of the South African FA Cup at home in the first round by second division club Richards’ Bay.

Coach Gavin Hunt called it “an embarrassment” but it was just another setback in a season where Chiefs have reached the halfway mark of the league campaign in eighth place, with just four wins from 15 games.

The team have battled with injury, notably the ankle surgery that kept last season’s top scorer Serbian Samir Nurkovic out of the first part of the campaign and more recently a broken leg suffered by Zimbabwe international Khama Billiat.

The real crux of their slump is the Fifa transfer ban slapped on them after world football’s governing body found they had signed the Madagascar international Andriamirado Andrianarimanana from Malagasy side Fosa Juniors but failed to pay a transfer fee.

They were not allowed to sign any new players this season and with a threadbare squad, they have struggle to maintain any consistency or keep pace.

It adds to a growing malaise at the family-run club, which is now in a sixth season without a trophy and rapidly losing much of its lustre.

This time last year, just before the Covid-19 pandemic hit and subsequent lockdown, Chiefs had a healthy lead in South Africa’s Premier League but blew it when the season resumed in a biosecure ‘bubble’.

Chiefs needed to win their last game against lowly Baroka FC in Johannesburg but drew the game, leaving Sundowns to retain the championship.

It saw German club Ernst Middendorp fired a few days later and the hiring of Hunt, one of South African football’s most successful coaches but who is battling to keep his head above water this season.

For once, Hunt may truly hope for success in African competition to salvage Chiefs’ season.