A Muskoka cottage owner paid $64K to save it. This is what she was left with

Liz Saunders ambles around the outside of her family’s modest summer cottage near Bracebridge, Ont., contemplating how things went so wrong.

The 900-square-foot structure, built by her grandfather in 1931, has always been a cherished family getaway.

“It’s way more than a building, it’s my sanctuary. It’s my favourite place in the world. I’d rather come here than go on a trip,” the 64-year-old grandmother told CBC News.

“To me when I’m here, especially if I’m having a rough time, it just totally calms me down, as if my grandfather is still here saying, ‘You’re good, you’re here. Relax,'” Saunders said.

But lately, things have been anything but relaxing.

A couple of years ago Saunders decided that the foundation of the cottage needed to be shored up. Two contractors suggested tearing the cottage down and rebuilding it entirely — an idea she shuddered at.

Then, in 2018, she found Cottage Life Construction.

“‘Oh, we love old cottages, we love lifting them. We know exactly what you want, you want to preserve it,'” Saunders recalled a company salesperson telling her.

She hired Cottage Life Construction to lift the cottage, build a foundation and ease it back down again. She signed a contract and paid a deposit.

She waited almost two years for them to lift the cottage. After it was hoisted, she agreed to pay the remainder of the $64,000.

She paid it to the company’s owner, Scottie Evan, not realizing he wasn’t who he claimed to be.

Work hasn’t resumed. In June, after the contractor allegedly walked away, having left Saunders’s cottage perched precariously two metres off the ground, she found out his real name was Scott “Scottie” Eisemann.

“I Googled him and found out he defrauded a 92-year-old blind woman out of $132,000, and I was gobsmacked. Like, literally speechless. And I thought, you scumbag,” she said.

“It’s heartbreaking because I started this project to try and preserve it for future generations,” Saunders said. “I’m angry as hell.” 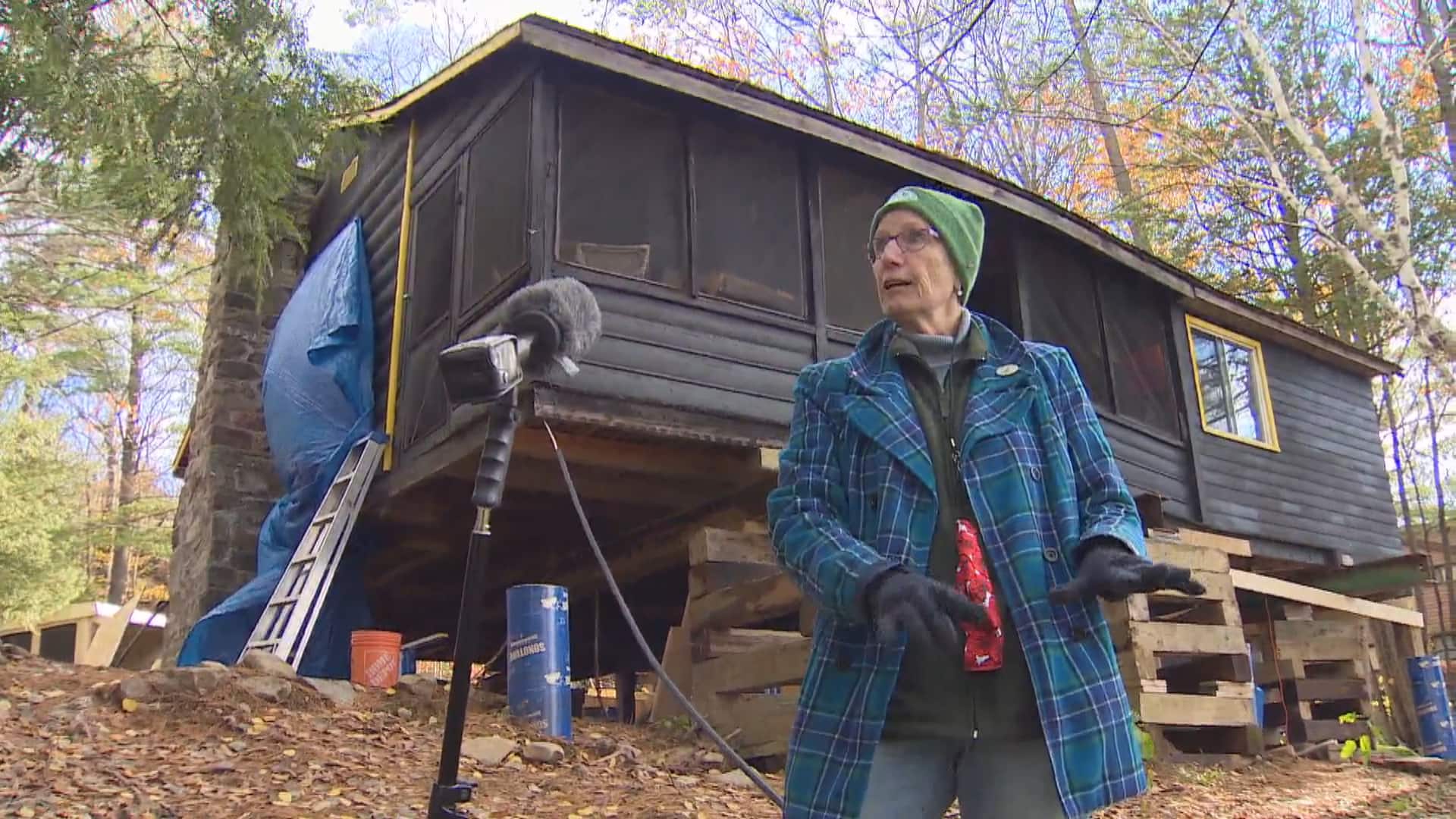 Liz Saunders paid Cottage Life Construction $64,000 to raise her cottage, build a new foundation and lower it back down. It’s now sagging after being left in the air for almost five months. 1:04

Saunders has since filed a fraud complaint with the Ontario Provincial Police.

He was sentenced to two years in prison after the judge determined Eisemann had taken the money from the victim for “needless renovations” on her home.

Since then, Eisemann and the company have racked up numerous complaints from home and cottage owners around the Muskoka area, who claim he took hundreds of thousands of dollars in deposits from them but didn’t complete the work he was paid to do.

CBC News has learned four different OPP detachments in cottage country northwest of Toronto are investigating multiple complaints against Eisemann and his company.

“We are aware of the incidents and they are currently under investigation, so we are unable to provide details at this time, as the investigations are ongoing,” acting OPP Sgt. Katy Viccary told CBC News. She urged others with complaints about Eisemann to contact their local OPP detachment.

Viccary also said southern Georgian Bay OPP charged Eisemann in September 2019 with fraud and false pretences in another investigation. Those allegations have yet to be tested in court.

Eisemann did not reply to calls or emails from CBC News asking for comment.

Cottagers paid $14K for work that was never done

Oakville resident Rene Langevin and his wife, Pamela, have also filed a police report alleging they were defrauded by Eisemann and Cottage Life Construction.

The couple bought their cottage near Parry Sound in 2019. Soon after, they looked around for contractors to renovate the bathroom and build a powder room.

“My wife came across Scottie’s website, Cottage Life Construction — beautiful-looking site, liked the name, so we had him come to the cottage,” Langevin recounted. “He gave us a very competitive quote, so on the spot we said, ‘Yes, let’s go for this.'”

They signed a $14,000 contract with the company. It appeared to be signed with the name Scott Daniels.

Langevin said he was promised the work would begin within a matter of days, and he and his wife shelled out about half of the money up front.

Langevin said they were wary but relented. Still, the delays and excuses continued.

“We got some pretty crazy ones, ranging from his wife got vertigo. One of them was there was an emergency because someone’s roof had collapsed. He had one where he said his workers didn’t want to work because it was too close to Christmas,” Langevin recounted.

“We just got a bit of everything. He’s a master of excuses, I would say.”

Finally in February, Langevin said the couple had heard enough. They wanted their $14,000 back. “Scottie,” as they knew him, drove to their home and gave them a cheque.

It bounced, according to Langevin.

By then, Cottage Life Construction was insolvent and seeking bankruptcy protection. The bankruptcy records revealed that Langevin had been dealing with Scott Eisemann, not a Scott Daniels.

Had they known about it, “we would never have thought of using Scottie,” Langevin said.

He and his wife found another contractor to renovate their bathroom. Overall, they’ve shelled out $30,000 for it, including the $14,000 they paid Eisemann.

Meanwhile, Saunders said her cottage hasn’t done well, perched atop the shifting ground for almost five months now. Floor joists are listing badly, she said, while walls are bursting outward and the roof is sagging.

“It’s getting worse and worse. Just this week, a screen popped out because the cottage has shifted so badly,” said Saunders. “It’s devastating.”

Saunders said she scraped together $3,000 to pay a contractor for additional bracing, hoping it will help the cottage survive the approaching winter snow and blistering storms.

“My biggest fear is that it’s going to fall down,” she said.

Finding someone to build a foundation and lower the cottage isn’t financially possible anymore, she said.